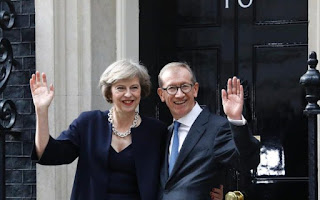 Few expected Theresa May to become Prime Minister.  She always had the ambition, reportedly telling her friends when at Oxford as an undergraduate that she wanted the top job.  But she didn't look likely to succeed Cameron. Painted as a rather dull detail freak with no social skills, during her leadership campaign she described herself directly saying:


"I know I’m not a showy politician. I don’t tour the television studios. I don’t gossip about people over lunch. I don’t go drinking in Parliament’s bars. I don’t often wear my heart on my sleeve. I just get on with the job in front of me".

But her first few weeks have shown her to be a creative problem solver, with a clear vision and an appetite for controversy and risk taking. I've underestimated her, and if her first few weeks are anything to go by I think she'll turn out to be a very interesting role model for women leaders.
The odds were against her. But hers is a story of gritty determination, luck and holding her nerve.

Even those leading the Leave campaign expected Britain to vote to stay.  Among those rare people who foresaw the outcome, I doubt whether many would have predicted May in Number 10.  Instead, as the reality of actually voting for Brexit sank in, there was a widespread assumption that the electorally successful Boris would succeed.

Ironically May probably has Michael Gove - someone whom she has publicly fallen out with - to thank for her escalation.  Had it not been for his Brutus moment with Boris and the subsequent collapse of his own  leadership bid, no doubt Boris would now be chairing his first cabinet meetings and wrestling with the comings and goings of Larry the Downing Street cat.

To my slight surprise, watching May settle into the top job has been a lesson in what good female leadership looks like.  She had a plan.  Which made a change.  No one up until that point appeared to have a plan for anything - least of all the fabled Brexit. But not May.  She was able to roll out a new cabinet in just 48 hours.  And it was a cabinet that had a lot of thought applied.  A lot more than anyone can generate in two days. I had a vision of May sitting through endless meetings over the past few years working out her Fantasy Cabinet.  You can just imagine her doodling a secret mind map and plotting. 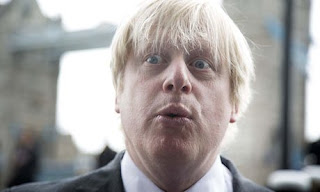 Most controversially, she put Boris in as Foreign Secretary to almost universal astonishment not least from Boris himself. But lest he should rub his hands with glee and think he had real power, she had thought ahead.  She stayed in control by restructuring the role to remove oversight of International Trade.  And what's more she's turned Chevening - the grace-and-favour house that goes with the job - into a time share, forcing him to bunk up with his other two hard-core Brexiteers David Davies and Liam Fox. The Guardian has helpfully posted some handy guidelines for the new house-sharers. 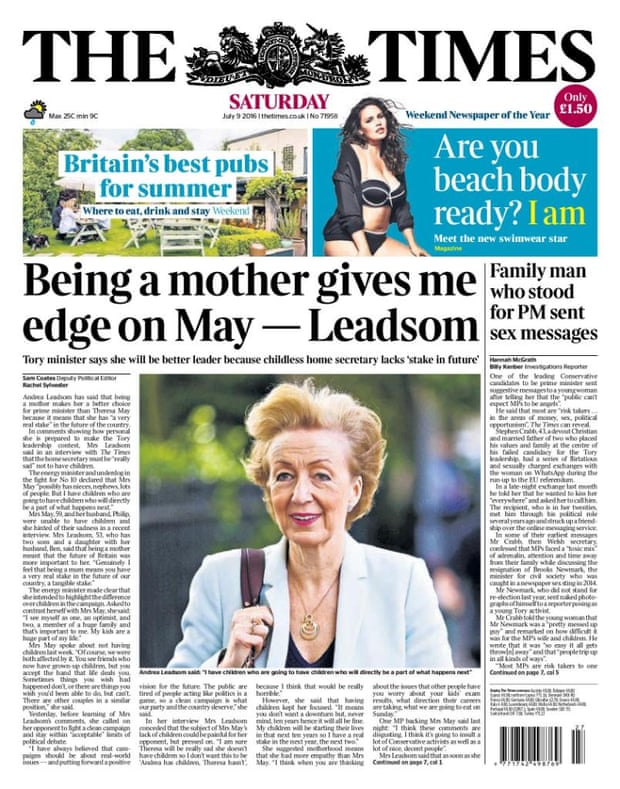 But she's exacting a high price for those stately home weekends, pushing all three men into the front line as they have to work out how to extract the UK from Europe.  How's that for accountability? She pours additional pressure onto them at every turn by helpfully reinforcing in her first Prime Minister's Questions (PMQ) and any other time she gets a chance that 'Brexit means Brexit' and the British people have made it very clear that migration controls are their priority.   Davies and Fox must be loving that.  I doubt whether the reward of every third weekend at Chevening makes up for the prospect of the horrendous negotiations with Juncker and his merry men that they must trudge through.  Meanwhile she doesn't ignore the details.  Osborne has been unceremoniously downgraded from his two-story riverside pad  to a tiny office next to the photocopier. And what of  her opponent in the leadership race - the hitherto unknown Andrea Leadsom?  She who destroyed her own hopes by telling a Times journalist that May's lack of children made her unsuitable for the top job.  After that, most people would have cast Leadsom into the political wilderness.  But May is clever.  Instead she put her in the cabinet where she can keep an eye on her.  But it's agriculture. That must have made Andrea jump for joy.

Now May is installed, it seems as though she was always destined for the job.  She's taken control seamlessly, bringing some semblance of calm into the political maelstrom. First stop was Scotland to see Nichola Sturgeon.  When asked how they had got on, May said that there were plenty of things they could do together even though they  don't agree on everything.  This is a female leadership preference - focus immediately on what can be done even if the person on the other side of the table is threatening imminent divorce.  She delivered a barn-stoming performance at her first PMQ last week Theresa May takes on Jeremy Corbyn at her first PMQs

Again it felt as though she'd written those comments over the past few years, just waiting for the opportunity to deliver them.  The relish with which she taunted the hapless Jeremy Corbyn showed she's not above a bit of political derision.

We saw her again later that day giving a press conference with Angela Merkel.  We don't know much of what the two women discussed but I bet it was something like this:


"We're leaving Europe.  That's what the people want.  You know how this works Angela - you have the same problems in your neck of the woods.  So let's agree to take our time, be sensible, make sure we minimise any instability.  OK?"

For Angela, the news that Britain is leaving Germany alone with France as the only large player in Europe with any money has only made a bad year worse. She seemed happy to agree to a delay to signing Article 50.  Perhaps in the hope that May is someone she can work with.  Anything Merkel can do to soften the impact of Brexit is worth some public nice words. 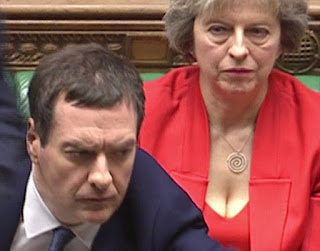 Much has already been written about May's fashion sense.  I have written before about female leaders being judged disproportionately by their appearance.  Many cry 'unfair' but May doesn't seem to have any issue with this.  Rather she appears to embrace it. Her decision to 'wear' her cleavage to Osborne's budget can't have been an accident.  Sitting beside him, she must have known it would have prolonged airtime during the long budget speech.

She has been known to favour Vivienne Westwood tartans and those famous animal print shoes.  Her Comms head, Katie Perrior says her wardrobe is May's way of expressing her personality. The outfit she chose for her first PMQ  was Lagarde-esque.  May claims to love clothes and asked for a subscription to Vogue as her luxury item when she appeared on Desert Island Discs. She seems to welcome the catwalk that being PM offers and will embrace it.

I'd like to see her with a softer more modern hairstyle.  Grey hair can be amazing as Lagarde has shown, but currently May's hair doesn't move and reminds me of the Maggie Thatcher helmet. A bit 1980s.

She could usefully give her new Foreign Secretary some style tips.  He appears to favour the 'I found this on the floor - quick shake - that will do' school of dressing. With a Savile Row make over and a decent haircut, Boris could make a real impact. He's got all the raw material - big brain, international pedigree, great engagement skills.  It's just that too often they don't connect in the right order.  But if he can sort that out, he might surprise us all yet.

But for the foreseeable future, it's all going to be about Theresa May. And my hunch is that we'll learn a lot from her about how to lead. For starters: Step into the leadership limelight with confidence. Have a plan. Know what you're going to do. Be clear from the outset who's on your team, what's expected of them and hold them accountable.  State your goals. Clearly.  Don't shy away from controversial choices.  Engage with other senior women as early as you can and get working on problems you can solve avoiding unnecessary posturing over things you probably can't.  Know what suits you, stick to it and don't forget every time you go to work you've got an opportunity to use yourself to reinforce your values and priorities.