Rewarding Outcomes: Why we need to widen the pay gap to deliver real equality in the workplace

The gender pay gap rarely seems to be out of the news. Theresa May provided extra impetus in her first speech as Prime Minister saying: "If you’re a woman, you will earn less than a man".

The latest contribution to the debate was last week's publication of a major new piece of research by the Institute of Fiscal Studies. demonstrated the ongoing reality of the problem. The report shows that the overall gender gap remains.

Slowest progress has been in  the most highly educated group where there has been little progress for twenty years.  The data also proves the popular assumption that women in part time roles get paid slightly less.  But the most dramatic finding was the impact of having children.  Here women pay the price: 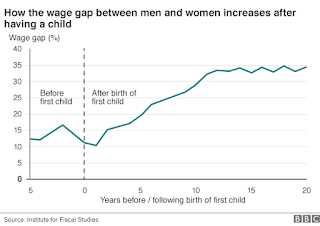 Once women return to work after having their first child, the gender pay gap starts to accelerate as each year passes - hitting a massive 33 per cent by the twelve year mark.

The analysis makes for uncomfortable reading.  It's easy to see why commentators reach for the 'equal pay' moniker in response.  But I think this is misleading.

The IFS research shows a significant drop off in employment rates for women after having their first child.  As we know, of those who return to work many choose part-time options. If you are happy to trade part-time convenience for a lower rate of pay,  that's fine.  But the current argument doing the rounds of social media seems to be that all part time jobs should be paid at the same rate as full time jobs.  And further that if this doesn't happen it's condemning women (who are the majority of part time workers) to the 'Mommy Track' by denying them the top jobs.

It's hard to pity Kevin Roberts. The erstwhile Chairman of Saatchi left his job over his comments made at the end of July. His comments implied that women don't have the same ambition as men, and it doesn't matter that they're aren't may of them running advertising agencies. But by pushing him out, the harder discussion gets shut down.  And it needs to be had if we're going to see progress.

We need to face some facts.  Most top jobs require you to take responsibility for outcomes. Not processes, or inputs, or workstreams or pathways.  But results - results that can be measured and judged. And our society is moving away from incentivising these challenging roles effectively.

Public pressure over pay differentials between bosses and workers is hiding a difficult truth.  That it's increasingly much more attractive to be a Number 2 than a Number 1. There's a nationwide shortage of Headteachers with research last year showing 88% of teachers think top roles are less appealing than in 2010.  More and more GPs want to go part-time or retire early -  BMA/ICM research concluded that 17% of GP are considering going part-time, including 28% of those who currently work full-time. Any headhunter will tell you that filling top roles is harder than it's ever been.

All cite increased pressure on decision making with public pressure and criticism ready to undo careers at a moment's notice. For many people - men or women - it's just not worth it. Number 2 roles bring almost all the same benefit and virtually none of the downside.  And if that doesn't appeal, many think if they have to work so hard and take a lot of risk, they're better off working for themselves. According to Start Up Britain, start ups have increased by nearly 30 per cent in the past five years.

This is diminishing talent pipelines - particularly amongst women. We need to incentivise these roles better, so that it is worth taking them. Being in the public eye has never been less attractive.

There can't be a better example that the role of UK Prime Minister. The UK media love to use the Prime Minister's salary as a benchmark for top salaries - implying that it is the ultimate top job and
that anyone earning more than this is shockingly overpaid.  The salary for this top role is £142,500.  In comparison, the Speaker of the House of Commons receives slightly more £142,826.  The PM has to take responsibility for 64 million people and the fifth largest economy in the world. John Bercow, the current Speaker, has to keep order amongst 650 MPs.  I know which option I'd go for.


In the past decade I've been in the top job and in the senior management team.  I know the difference first hand. When you're in the top job, you own the outcome.  Alone. That's why they call it 'the loneliness of leadership'.  You're never away from the worry.  But it's virtually impossible to worry part-time about full-time outcomes.   If you think you're going to have to choose between laying off staff or selling a division of your business, you can't say "I'll get back to worrying about that on Tuesday morning".

And it's the same in the public sector.  As a patient, it feels like no one individual actually 'owns' your outcome - your health.  Instead, it feels like everyone owns a bit of the process.  Many of the people delivering their bit of your healthcare process are doing so part-time. That's great for providing job options that fit around families, but is the patient actually better or worse off?

Wrapping these issues up in a drumbeat about equal pay isn't helpful.  Instead organisations need to recognize that men and women need to see real incentives to take the top roles. Incentives and rewards that will allow women to view these roles as more realistic options for them to return to work full-time.  That in turn will deepen the talent pool available which has to improve long term outcomes whether for shareholders, schoolchildren or patients.

Posted by Sally Costerton at 09:15 No comments: