The forthcoming EU referendum might seem to have little to with winning influence in the Boardroom.  But this week's revelations of a spectacular catfight between two of the UK's leading political players has highlighted a key issues that holds many women back.

David Cameron was reportedly angry and hurt when his close friend and political ally Michael Gove announced he would split from the official government position to become a leading voice of the 'leave' camp. But it's not their drama that's hit the headlines - rather that featuring their wives.  Both are high profile women in their own right. At a party in February, the PM's wife Samantha Cameron and Mrs Gove exchanged four letter insults over the issue.  Mrs Gove responded later in print under her professional name Sarah Vine.   A well-known national journalist, she penned a 'more in sadness than in anger' piece putting her point of view defending her husband's decision.

Close friends
Political arguments aren't unusual. What makes the Cam/Vine spat  noteworthy is that the two families - and the two women - have been close friends for many years.  They've shared holidays and were neighbours in West London before the Cameron's moved to Downing Street. Both their daughters attend the same London school and Ms Vine is the godmother of one of the Cameron's daughters. Since the incident in February there has apparently been no contact between them.
You might expect the two men to be distant.  But they seem to have put the issue to one side and continued their ongoing friendship. Infact in the last couple of weeks Gove supporting Cameron unequivocally over the Cameron family taxation row thrown up by the Panama Papers.
Video: Michael Gove - Criticisms of David Cameron are politically motivated - BelfastTelegraph.co.uk

Why such different reactions? The media seem amazed that the women are taking this so seriously.  I'm not remotely surprised.  It's one of the key differences between men and women and one that I think really advantages men in their career progression.

These differences between the sexes seem to start early. Helen Rumbelow explored this in an excellent article in this week's Times. It featured an interview with Emma Gleadhill who teaches and speaks about adolescent mental health issues.  Her lectures and courses are informed by her background - most recently spending six years as the deputy head of Godolphin and Latymer - a leading London girls'
school. Rumbelow quotes Gleadhill in the article:

"Whether “it’s nature or nurture” is up in the air, but girls do arrive at adolescence ready to make their friendships the heart and soul of their life. “All teenagers are heavily invested in fitting in with their peer group...this occurs as they transfer some of the intense childhood bond with their parents to their friends. However, boys typically arrange their friendships around a “third element” such as sport or music. Girls have shared interests too, but the friendship is the “currency”.
“So trading secrets about who you think is not very nice, analysing other people’s behaviour, will be part of the way in which girls bond. It is very interesting the way people focus on girls as bitches. Boys are equally capable of having competitive rivalries, nastinesses and put-downs, but in terms of their intense relationships there is also that third element, which takes the heat out of that personal connection.”

High stakes
Betrayal of trust is a make or break issue for both sexes.  But for men, that trust typically isn't tied up in issues.  They naturally separate the act from the actor. They can fight and argue and utterly fail to reach consensus.  And then go happily to the pub and have a great evening.  It never ocurs to them that disagreements might threaten their relationship.  It can actually be bonding.  But women often  find it extremely difficult to separate the issues from the individuals that hold them. They vest much of their social currency directly in their group of friends.  Belonging is everything. Nothing must threaten that and this leads to conformity and agreement to maintain this.  Suppressing disagreement can easily become a habit.


I recognize this.  I think it started around the time  I moved to secondary school aged 12. I went to an all-girls boarding school and my friendship group immediately became a replacement for my family. 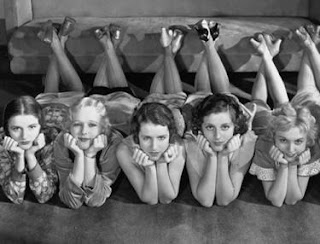 But even girls in mixed-sex schools living at home tend to do this by their mid-teens. As we leave education and start our adult lives most of us deepen these relationships further and so reinforce this behaviour learned in childhood. Once we hit the workplace this ingrained desire to maintain the harmony that comes from a tightly knit group takes over.  It manifests as avoidance of conflict and confrontation.  But sometimes issues need to be surfaced and avoiding them can lead to deeply suppressed anger which holds us back. I can often hear the voice in my head saying "this issue just isn't getting resolved.  I should say something".  Then my 'teenage girl' voice says "if you confront this you will be seen as negative and aggressive".  It's a daily tension for most women and not just at work.  But if you want to progress your career into senior management you have to find ways to let that inner voice out on issues that matter to the organisation.  If you consistently suppress it, you won't be seen as a future leader.

Maybe this is one of those things - like childbirth - which is just hardwired into the X and Y chromosomes.  But I think we can overcome nature by nurturing new skills.

Ask open questions
Something that works well for both sexes is asking open questions. If you find yourself  in a meeting feeling that familiar sense of frustration that comes with feeling that no one is addressing the underlying problem at hand, don't seeth silently.  Try asking the project leader questions like "what are you most confident about with this project and what most worries you? When they tell you what worries them, ask them a supplementary question like "how do you think we should tackle that issue? What do you need from me/us to help you to mitigate that risk? And then follow up with a question about expectations and results " how do you think we should measure the work? "

All these questions need to start with words like "How" or "Why do think" .. or "What if?" It doesn't matter whether you are the boss, peer or subordinate in this discussion.  Well-phrased and crucially open questions encourage honest non judgemental discussion about solving problems. They help to prevent confrontational behaviour by separating the action from the actor. And they have the additional benefit of airing key issues collaboratively that are holding up progress and helping  to move things forward.

So next time you hear that teenage girl's voice in your head - ignore it. And feel the satisfaction of seeing problems start to get resolved.

Posted by Sally Costerton at 22:22 No comments: