White House Women - can the Presidential Election provide a spotlight for change? 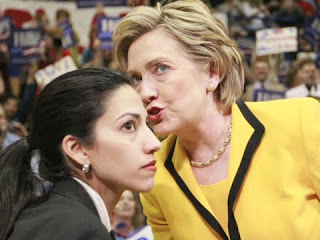 As the US Presidential primaries get underway, much of the discussion has been about  the Trump phenomenon - and whether Bernie Sanders can 'do an Obama' and steal a march on Democrat front-runner Hilary Clinton.

There's been far less discussion of the historic opportunity of the first woman in the White House and the momentum it could provide to deliver real progress on gender equality in the US.  I hope that's about to change.

I can't think of a better platform to discuss the real issues that face women aspiring to leadership positions in society.

It's not just Hillary herself who raises interesting issues of female leadership and influence.  Many may not realise that the vice-chair of her campaign  is also a woman who is the topic of debate in her own right.

Huma Abedin has worked for Hillary for twenty years - since she was a 19 year old college student. Like her boss she has had to endure being publicly let down by her high profile political husband - in her case former congressman and failed New York mayoral candidate Anthony Weiner. In common with many women she is now the major bread winner and she now has to provide for her - probably unemployable - husband - and their son.  Her solution is to 'lean in' and allow the world to see her life play out.  It's a risky gamble, but as Hillary discovered, there are votes in standing by your man.

Hillary has demonstrated calm leadership in the face of bitter criticism - and not just of her husband's judgement.  Time and time again she has been pilloried for her choice of clothes, her hair, her 'blue- stockinged' attitude, her money and her choices of friends. But she has mastered the art of gliding through it all with grace and dignity.

There was an interesting piece in this week's FT looking at how she handled defeat in new Hampshire.  She was not expected to lose - and certainly not by such a large margin. A less experienced leader might have shown surprise, sadness or regret.  But Hillary knows better.

How Hillary Clinton crafted a kind of victory out of defeat - FT.com 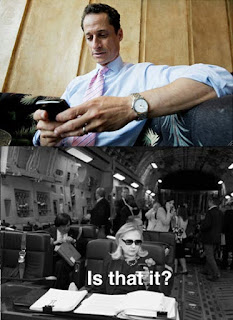 I've always thought she gives off an old school feminist vibe. I'd like to see her champion women in her campaign. But it needs to feel fresh and relevant. Humour has worked well for her. I loved the 'texting' campaign as did many people and it made me see her in a different light.  Less the slightly earnest survivor - more the pithy modern female leader.  It started in 2012 but has kept on going - recently even featuring Abedin's unfortunate spouse.

Hillary of course already knows the gritty reality.  She needs plenty of strong support to win the nomination and avoid a last minute inside dash from Bernie Sanders.  She needs to play to her advantages as much as she can.

Over with the Republicans, I'd largely forgotten about Sarah Palin - the professional 'hockey mom'. But she's back looking like she'd never been away.  This time she's trying to persuade us to put Donald Trump in the oval office. Her fashion choices have always attracted criticism and that continues.  One British fashion journalist rather unkindly described the leather jacket she was wearing on the stump as 'looking like she'd climbed inside her handbag'.   She attracts plenty of attention for her controversial views as well her eccentric style. I wish she'd killed Trump's campaign stone dead by turning up to cheer-lead for him. But I fear that those voters who find Trump's proposition appealing are likely to warm to her nationlistic, family-first jargon. 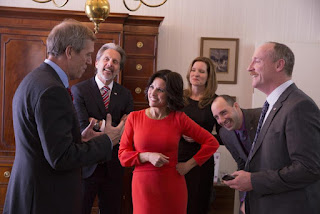 Better advice for women in powerful jobs comes from another US political leader - this time a fictional one, VEEP Selena Mayer. Played by Julia Louis-Dreyfus, the character finally becomes president in Series 4. VEEP has been described by Washington insiders as a very realistic picture of life in the top job. It comes from the same writing stable as The Thick of It which satirised the Blair years in Downing Street.  The writers created the term 'omnishambles' for the show - which became so popular with political types that it entered the Oxford Dictionary in 2012.   Selena has to juggle constant firefighting, a complete loss of personal space and having to rise above a group of argumentative, point-scoring, almost exclusively male advisers to get anything sensible done. Ring any bells?

What can we take from this Presidential show as it plays out that  through the Spring and Summer?

If you're a women leader, your fashion choices are going to be scrutinized - and criticised by all and sundry.  It's unfair and irrelevant but it will happen anyway. You need a very clear narrative.  It needs to speak directly and powerfully to women as well as men - right across the age ranges if you're going to win.

And finally you need self belief, tenacity and and incredibly thick skin.

Posted by Sally Costerton at 14:59 No comments: